Fichu:  (French) From the past participle of ficher, to fix.  Indicates a light-weight kerchief folded into a triangle and fixed either with a knot or pin in the front (think a very small, triangular shawl).  Alternatively, it could be tucked into the bodice of the gown.  Used to hide excessive décolleté  in day gowns and to keep the neck and chest warm in cold weather as well as for decorative purposes.  Fichus were made of linen, silk or lace and could be decorated with lace or embroidery.  In Pride and Prejudice 1995 Jane Bennet (played by Susannah Harker) frequently wore fichus.

A similar article of clothing would be the chemisette (French, diminutive for shirt, “little shirt”), a partial shirt (with or without a collar) worn under a gown and tied under the bodice (at the waistline of Regency and Empire gowns) to keep it in place.  Also known as a tucker in England.  This article of clothing served the same purpose as the fichu: to fill in a low bodice for a more modest or decorative daytime look.

The chemisette was not the same as a chemise (French: shirt), which was an article of underclothing; a loose shirt worn under stays.  The purpose of the chemise was comfort and to keep the outer clothing free of perspiration.   It was a simple garment shaped like a T with short sleeves, underarm gussets for free movement, and a simple drawstring neckline which could be adjusted as needed for the bodice of the outer gown. 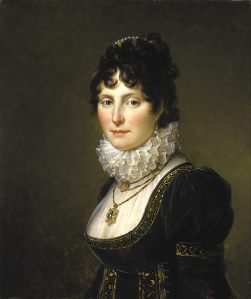 Lady Elgin wearing a fraise over a chemisette, 1804, by François Gérard

The last neckline decoration worn in the 18th and 19th Centuries which I want to mention was the fraise (French (archaic): neck ruff).  The modern meaning of fraise is “strawberry” but the original meaning was an embankment for protection from attack (i.e. rampart).  The same term would have been used for the rigid ruffs worn in the 16th Century, but the Georgian and Regency version was made of several soft layers of lace which came up high on the neck.  They were most popular with older women, who liked the way the fraise would disguise a double chin.

The author is a physician and historical fiction novelist. She is the author of Mr. Darcy's Little Sister.